A new outdoor deck is an exciting addition to your home and a great opportunity to extend your living and entertaining area outdoors.

Whether you are building straight off the back of your existing home, incorporating a deck into your new build or building a completely free-standing independent structure, there are a few key points that, after 30 years of supplying deck designs and products to builders and DIYers, Spantec think you should consider.

One of the most common questions we get asked is, “What size deck is right?” There are, however, several things you should consider to ensure that your deck will be right for you.

Consider in advance how high your deck is going to be. If you have a sloping site and want to add a further entertaining area or you want to maximise views don’t be scared off with feelings that your vision is unachievable, there are products on the market that offer expertise around these areas.

A few things to consider when making your decision:

There are many ways a deck can be constructed, and every year there seems to be more products on the market, but it all falls into two simple categories.

Consider What’s Under Your Deck

Selecting the right materials for your deck sub frame is just as important as selecting your decking boards. Many people choose a high-quality finish on top of their deck but then compromise on the sub structure below. This selection is crucial if you want your new deck to last and have an extended design life.

With so many durable hardwoods, multiple composite decking boards, and fully sealed tile deck options to choose from, a durable, environmentally friendly and low maintenance product like a steel sub structure may be a feasible option.

Australia is a large continent with a variety of climate zones. These climate zones range from the cold alpine areas of the Snowy Mountains through to the hot, tropical conditions of QLD and NT. The first step in finding the right material is considering where you live, and the type of weather your deck will experience throughout the year then match this with what products will be most durable and fit for purpose and what life expectancy you are looking to achieve for your new deck.
The following provides a brief description of each National Building Code (NCC) climate zones: 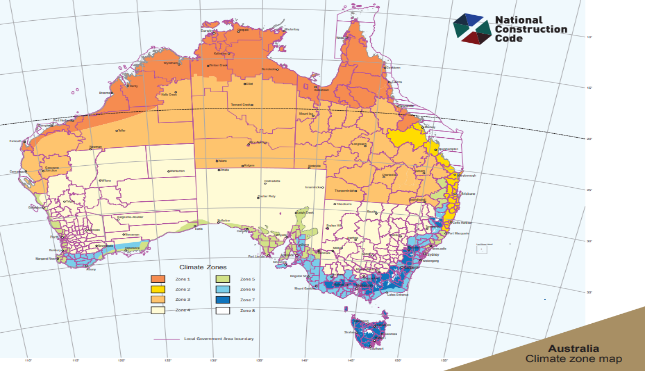 © Commonwealth of Australia and the States and Territories of Australia 2019, published by the Australian Building Codes Board.

The Spantec deck system is an engineered solution providing both exceptional performance while being simple to assemble giving you construction efficiency through speed of install. When dealing with Spantec you receive a full deck kit system including bearers, joists, adjustable piers, brackets, and all fixings.

Spantec provide custom designed construction plans to accompany a cut to length bearer and joist system which in conjunction with our Ezipier system make for a mechano-like kit suitable for the owner builder.

Our unique feature of printing and punching joist location on our bearers makes for fast and simple installation.

Spantec beams were also used to build the landing for the stairs and the second landing and steps down from verandah to deck. The customer chose our product as he wanted to build from steel to reduce bush fire risk and increase the longevity of the frame.

A system with clean lines was decided on so there was no place for anything to nest in the structure. A preference for Australian made products was also a consideration when choosing Spantec.

“[I was] very pleased with the detailed plans and markings. On the final inspection, the Head Building inspector from our Shire did the inspection and commented he thought it was the best deck he had seen.” 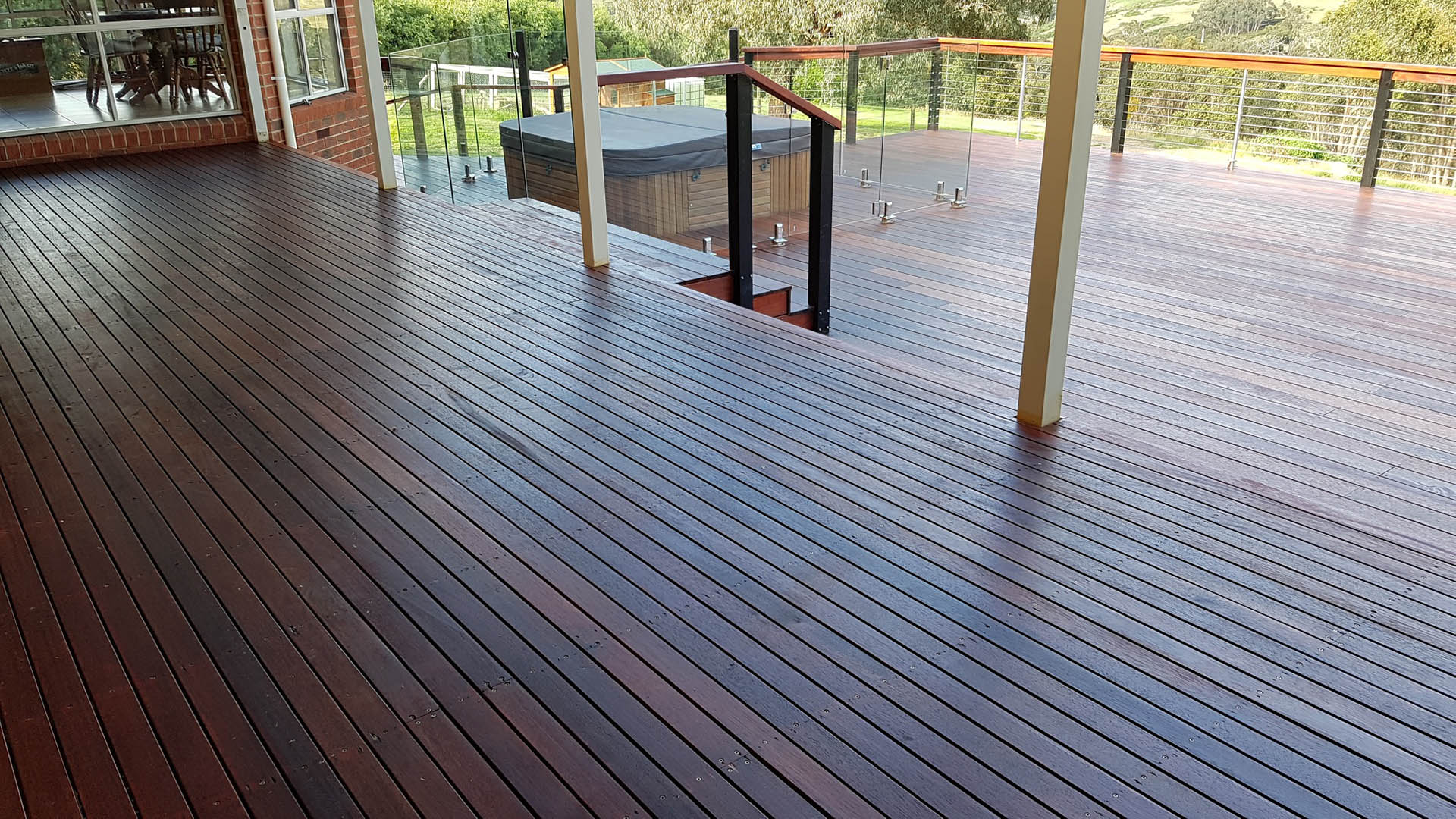 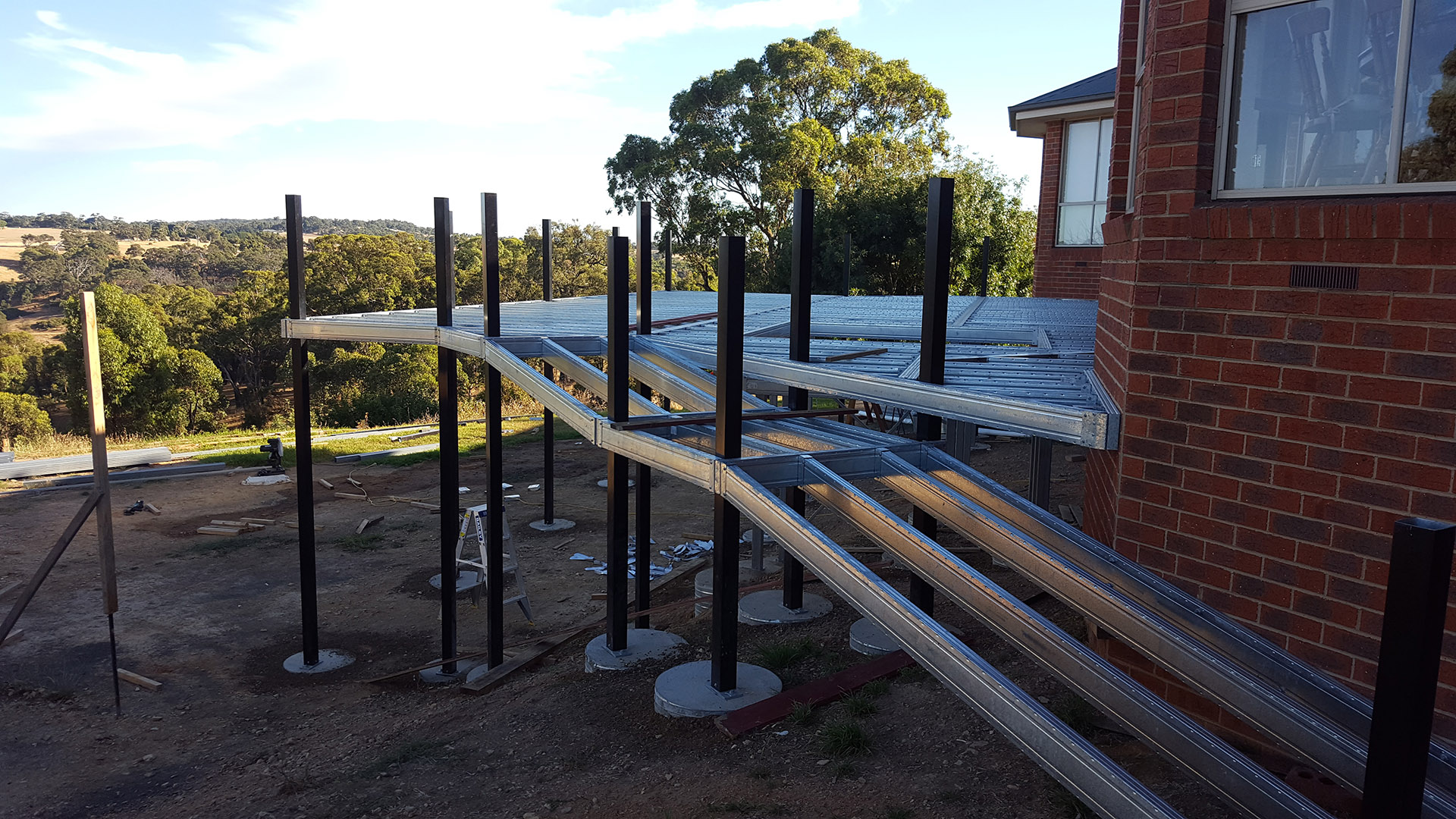 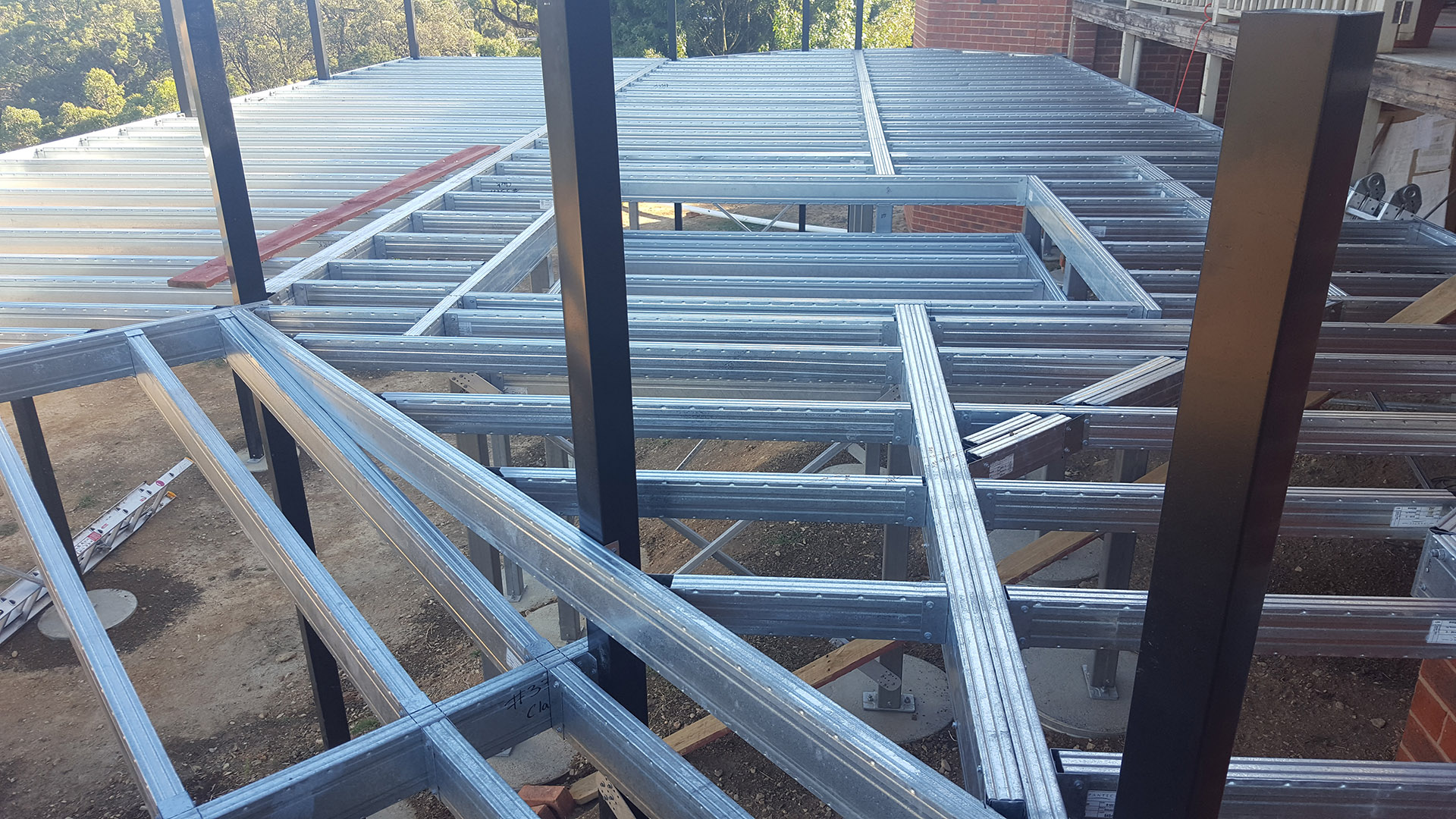 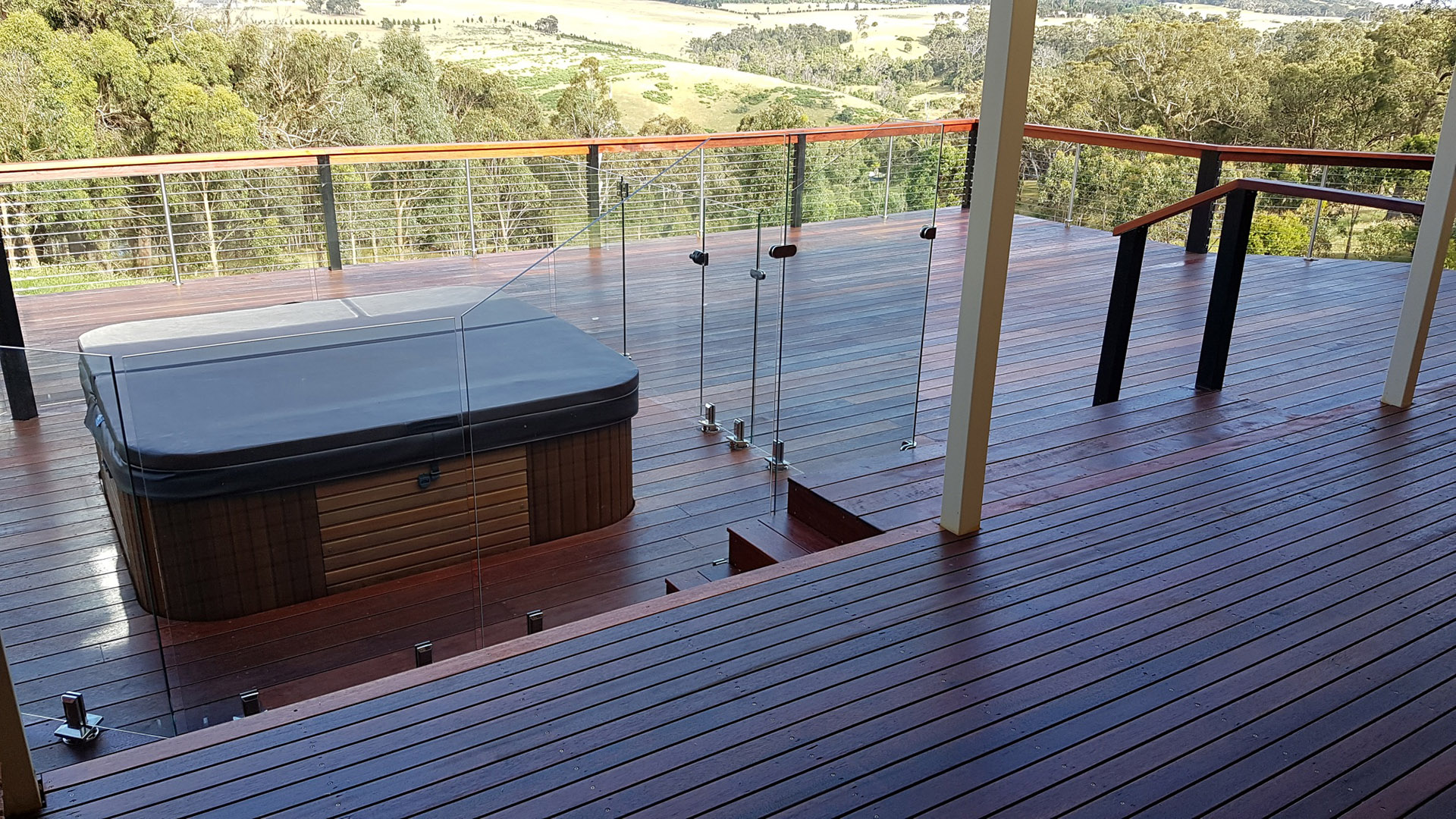 Spantec provide custom designed construction plans to accompany a cut to length bearer and joist system which in conjunction with our Ezipier system make for a mechano-like kit suitable for the owner builder.

Our unique feature of printing and punching joist location on our bearers makes for fast and simple installation.
This project was to build an 8m x 8m wooden deck with a metal frame under the existing alfresco area on a new home, this was to cantilever outside the brick columns. Being a property in a bush area a product that was termite resistant was required.

Spantec was chosen for this project as the owners researched options and found that our product met their concerns in relation to termites and appeared to be a system that was relatively easy to put together. They found it was indeed easy to assemble.

“We could not be happier, we love the Spantec system and the look it has given our Alfresco area, there is not one person who visits our property that doesn’t love this area. Naturally we advocate Spantec to each and every person that listens or may have a cause to use such a system.” 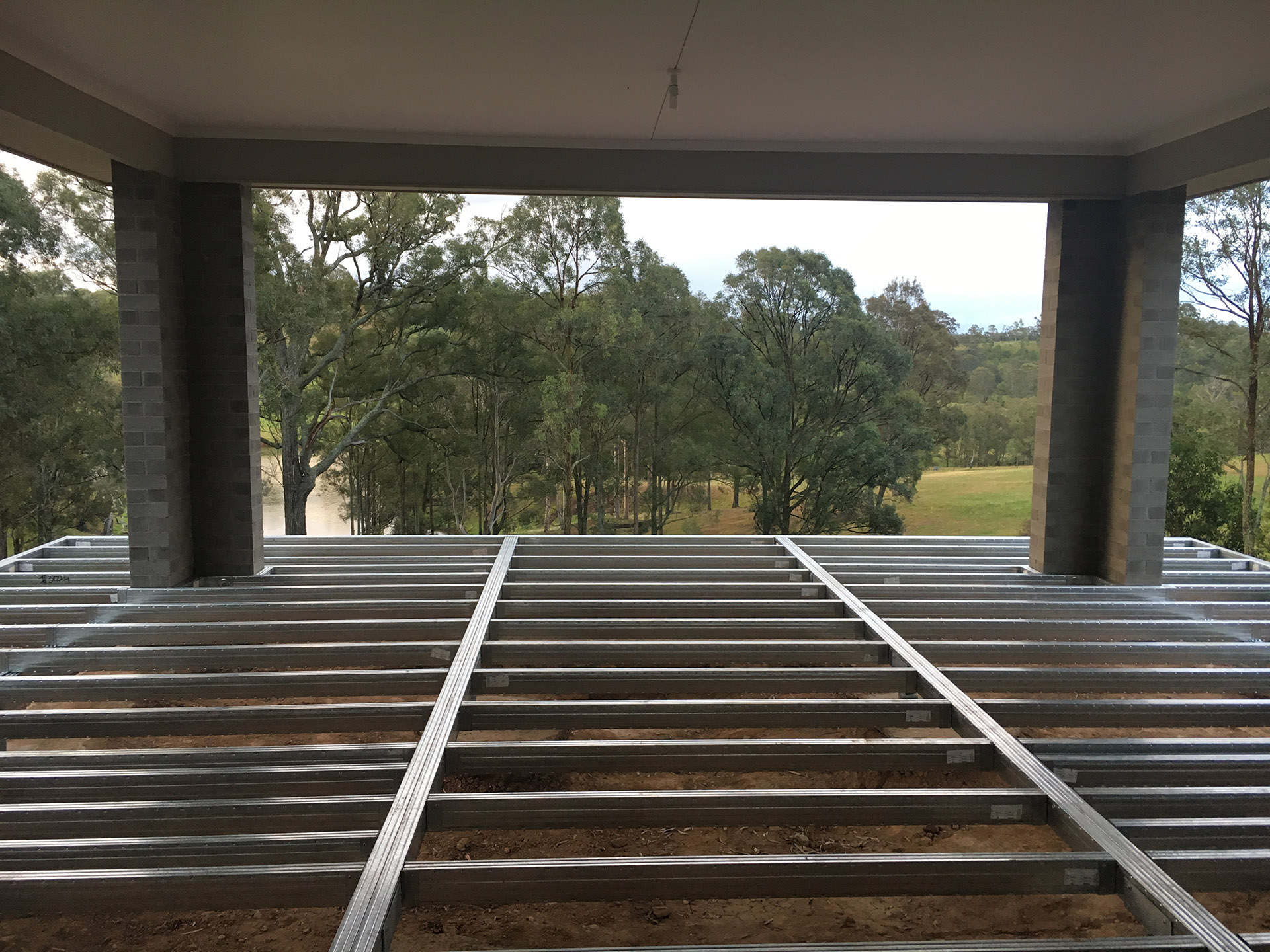 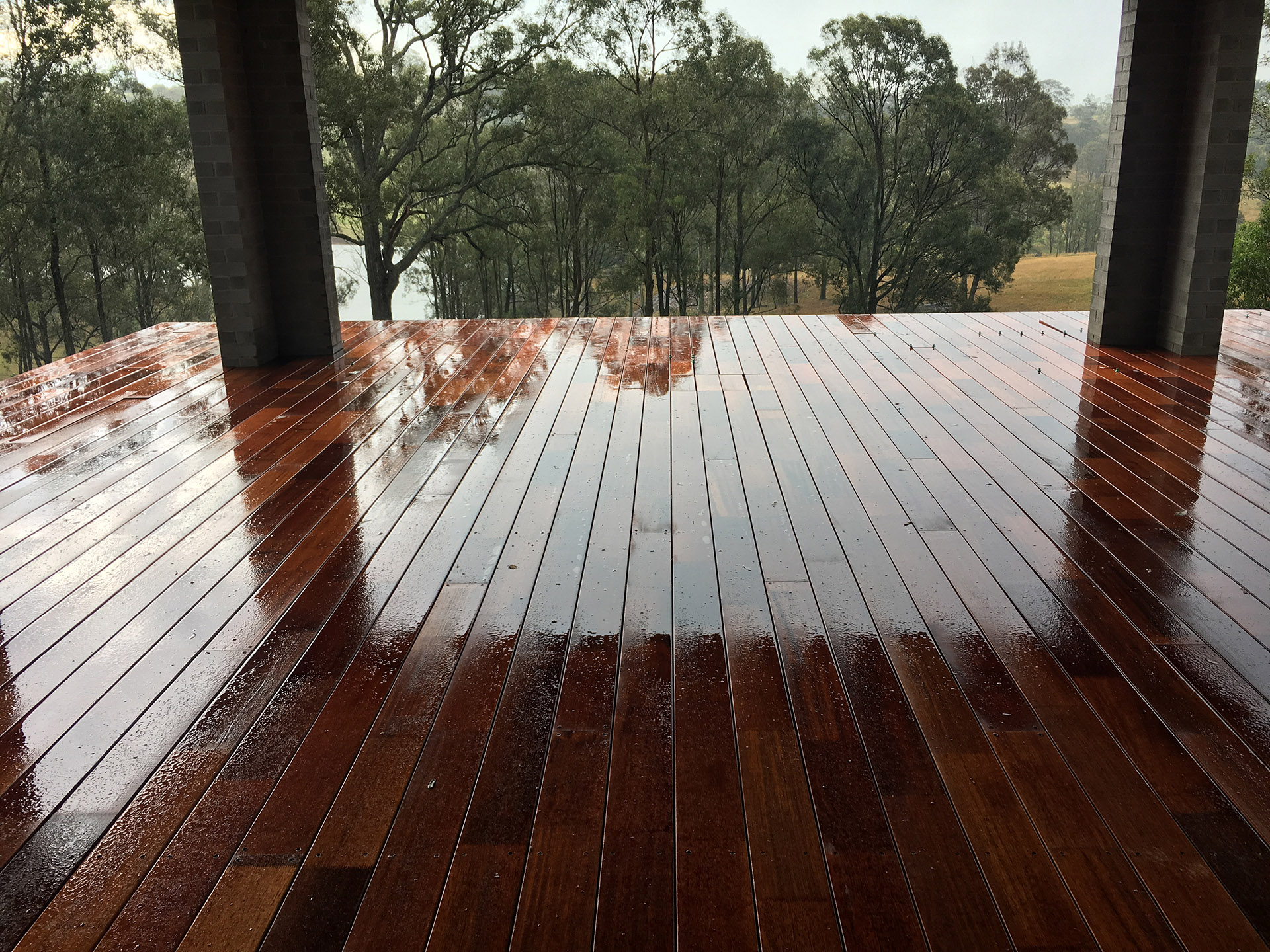 Standout home improvements have yet again created a beautiful deck structure using Boxspan deck and bracket products. Opting to use a steel deck for longevity, the client also wanted a powder coated matt finish to blend into the to the colours of the main house structure. With Spantec offering many different colours and paint finishes this was defiantly achievable and the end result looks fantastic.

Being a box section with simple saddle type brackets enabled Daniel and the team to simply construct the main L type deck structure with multiple landings heading down to ground level.

Matched with hardwood decking and an aluminium handrail system, the result was a beautiful architectural style deck that the owners will enjoy for years to come. 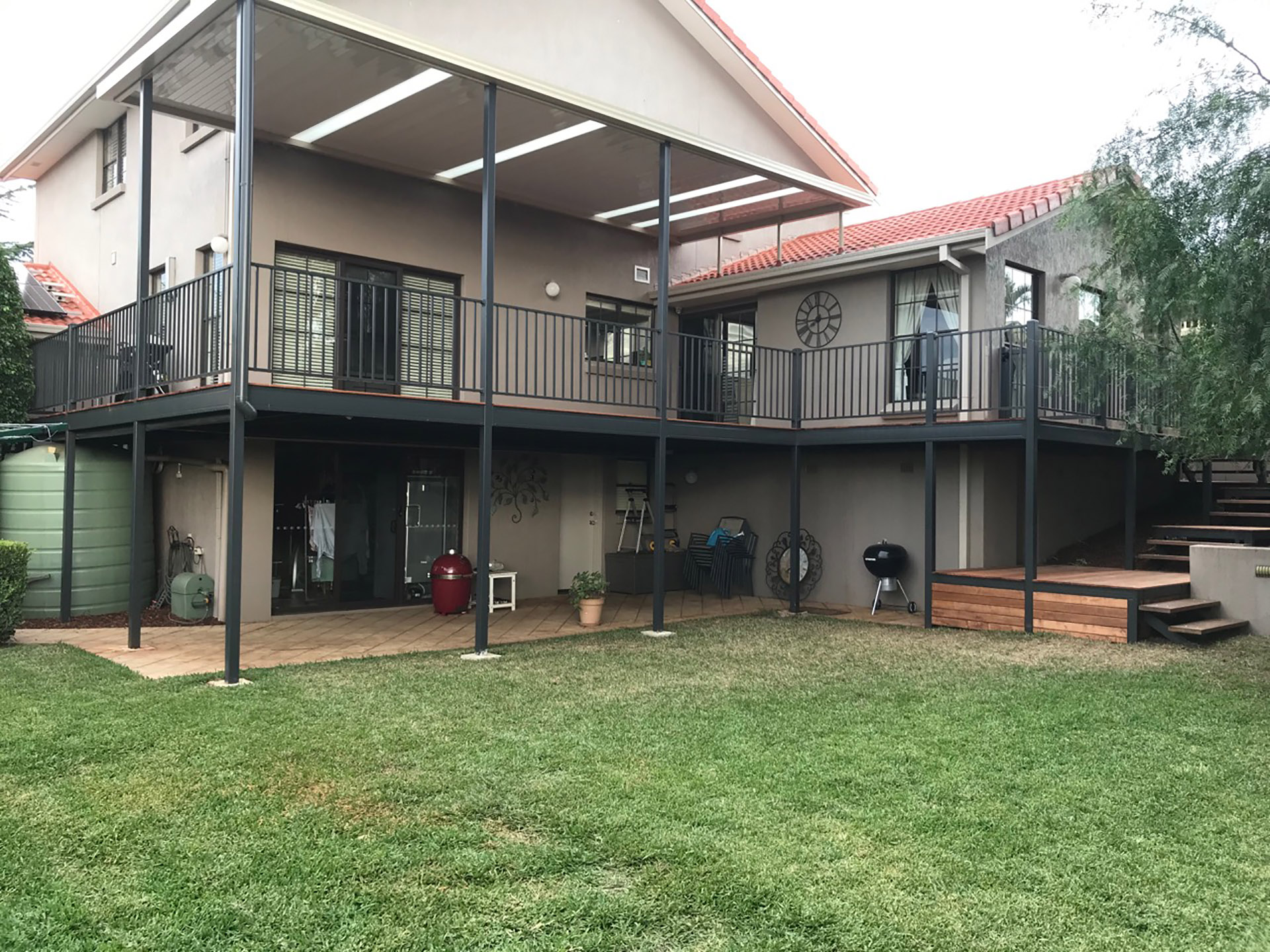 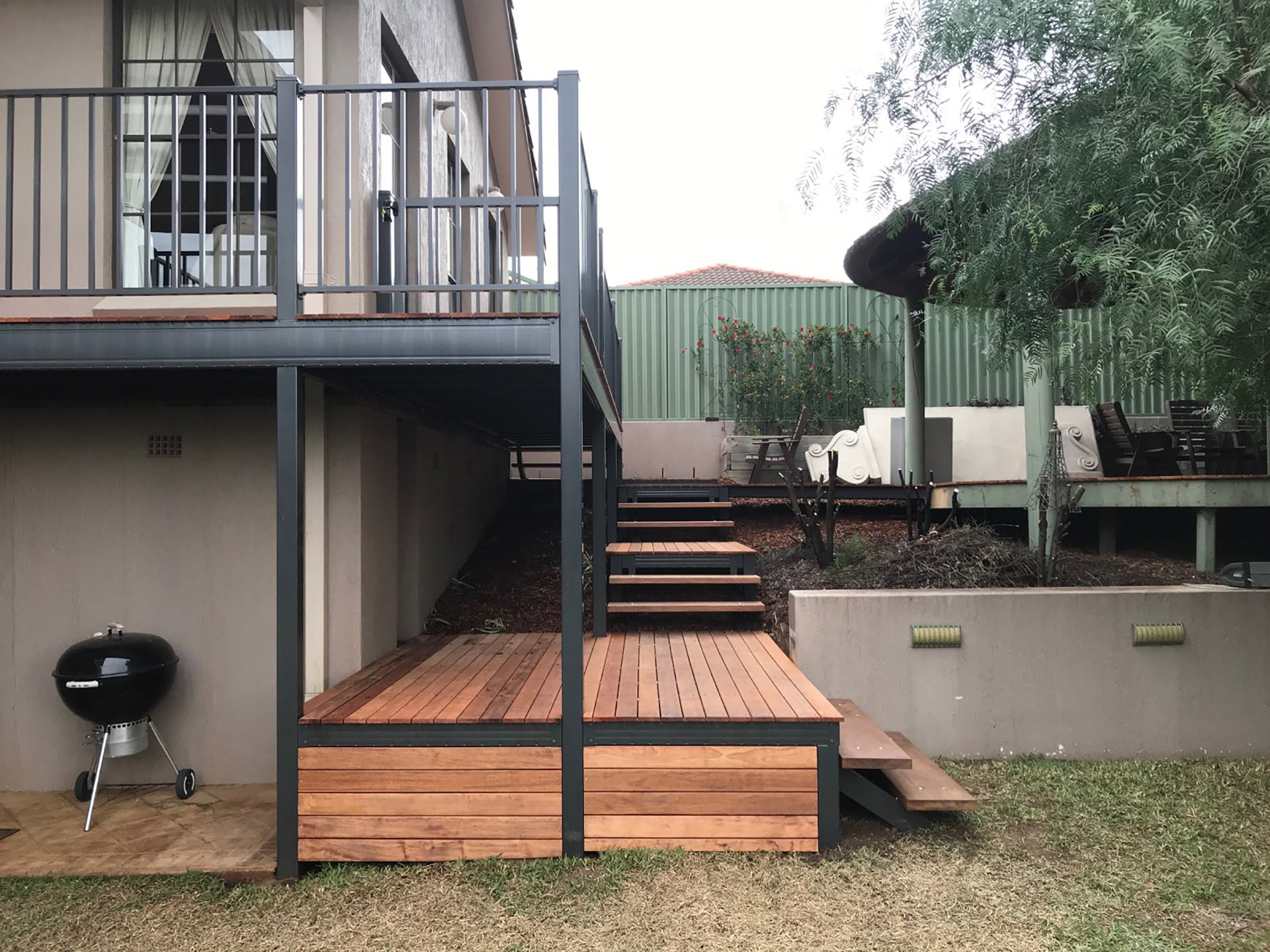 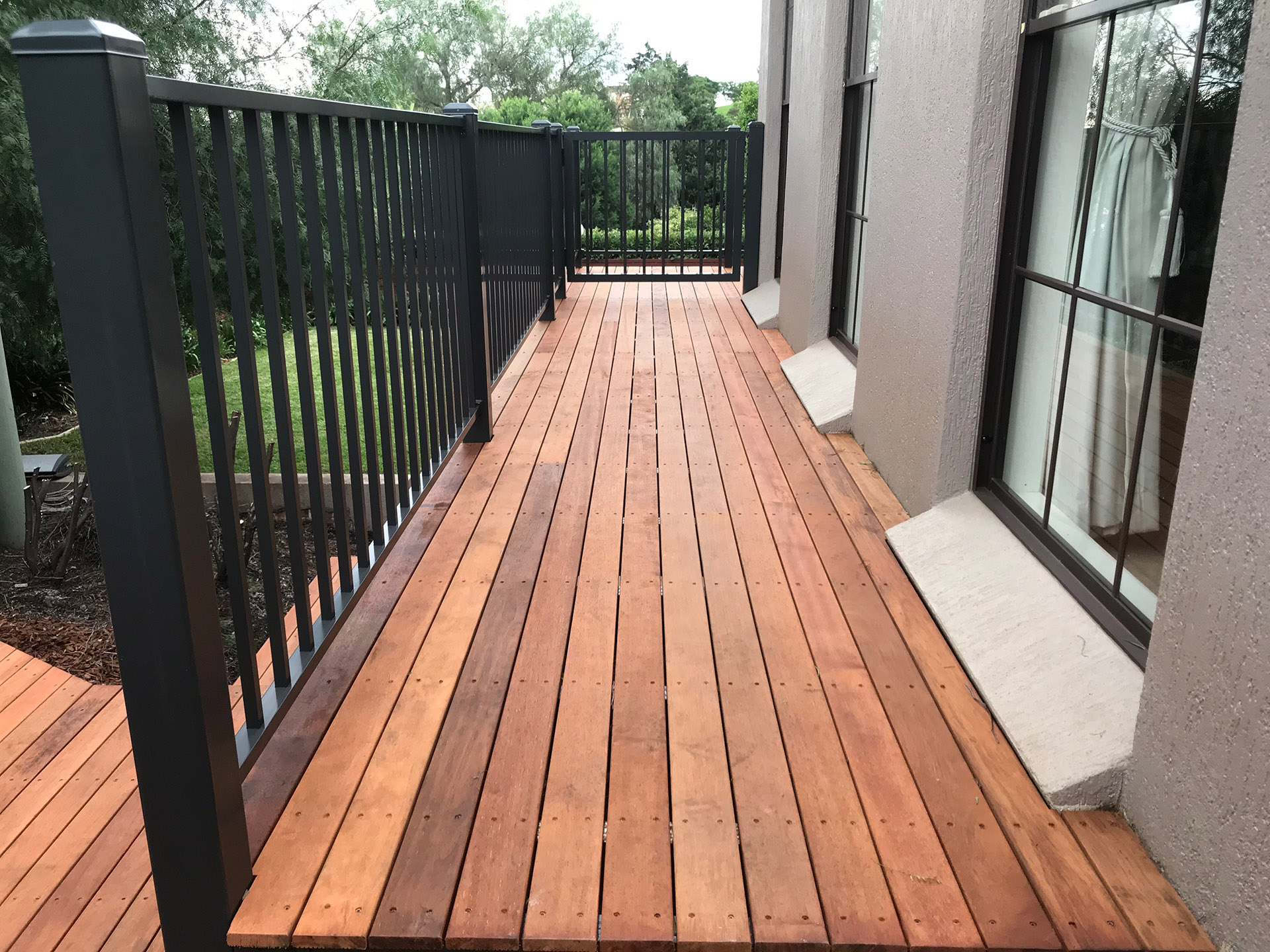