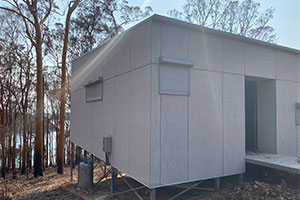 Never has the spotlight been shone so brightly on bushfires in Australia than in recent months where out-of-control fires tore through vast areas in NSW, ACT, Victoria and South Australia. It is estimated that more than 2,000 homes have been lost during the recent bushfire crisis in Australia.

National building requirements for residences in bushfire-prone areas were scaled-up after the “Black Saturday” bushfires in Victoria in 2009, in which 173 people died and more 2,000 homes were destroyed.

Like many regulations in Australia, buildings are regulated by states and territories but governments have recognised the value of nationally consistent building codes through the National Construction Code. This code, among other things, sets minimum standards for the design and construction of new buildings on bushfire-prone land.

A residential building on bushfire-prone land, the code states, must be designed and constructed to “reduce the risk” of ignition from a bushfire, appropriate to the risk from bushfire flames, burning embers, radiant heat and intensity of the bushfire attack.

Properties are assessed and given a “Bushfire Attack Level” (BAL) rating by inspectors who examine the risk to which a building is potentially exposed on the individual site and conditions such as vegetation type and density, and slope of the land.
There are six BAL levels that classify the severity of potential exposure to bushfire. The highest – BAL FZ – is for buildings exposed to an extreme risk, such as a house surrounded by trees that could produce direct contact from flames.

A house in Rosedale NSW that was rated BAL FZ, known colloquially as flame-zone, survived the recent bushfires when all the surrounding houses were destroyed. It was built in 2017 by Batemans Bay local builders TLC Constructions and aside from some minor damage caused by explosions from nearby houses as they burnt to the ground, it is remarkably untouched.

Even the chocolate biscuits survived

TLC Constructions owner Tim Love says that even the chocolate biscuits in the pantry survived the fiery inferno, and there was no trace of smoke inside the building.

“Although it was built to the highest fire-rating I must admit that I was skeptical about its chances of surviving such a ferocious fire, but the proof is there.

“There were many products and techniques used to build this house but chief among them was the Spantec flooring system which included posts, joists, and the Ezipier system. We’ve used the Spantec system many times before so we’re confident that it would work well on this job.

“This wasn’t a straightforward build so the architect Thomas Caddaye and TLC worked together to find the right solution for the client that also fitted their budget. It took longer than our usual design and approval phase but it was well worth the effort.

“We’ve built a number of houses in the flame-zone so understood the general concepts, but every new home is different so we needed to custom design it to suit the client and the site,” said Love.

Worked closely with Spantec to find the right solution

We’ve worked with Spantec for about 15 years so are very familiar with the product range. On this project, we worked closely with the Spantec team to ensure the product was utilised in the correct way to gain the maximum benefit. I find the Spantec flooring systems to be easy to use for lots of applications,” added Love.

He said that complying with the bushfire rating meant construction costs increased by about 20 to 25 per cent, but it was still an affordable house.

In the Rosedale home key elements that worked alongside the Spantec flooring system were the boundary wall cladding, hebel power floor and the approved fire-rated windows and shutter system.

The fires on the NSW south coast have now been brought under control which means many people need to rebuild their homes that were lost.

TLC Constructions has received an increase in the number of enquiries as a result of the destruction. “I certainly didn’t want to increase our workload in this way we are more than happy to be involved in the rebuilding process our knowledge of the fire-rating system will certainly make this more streamlined for everyone at this difficult time.

“As a local builder, I get a huge amount of satisfaction and pride from creating homes for people that they really love. We recently spoke with a couple who said they wanted to replace their home with something really similar but when we got them talking they realised that this is an opportunity to gain the things that their previous home lacked. And while they will take a long time to recover they are now excited about a brand new home and creating new memories.

“And I’m sure we’ll be working closely with Spantec to ensure the new homes meet the BAL requirements,” added Love.

For nearly 30 years Spantec Systems has been pioneering the use of steel for building professionals, owner-builders and DIY-ers. To find out how we can help with your next build, contact us on (02) 4860 1000 or by sales@spantec.com.au. Already have plans and engineer’s drawings? Then get a quote now.