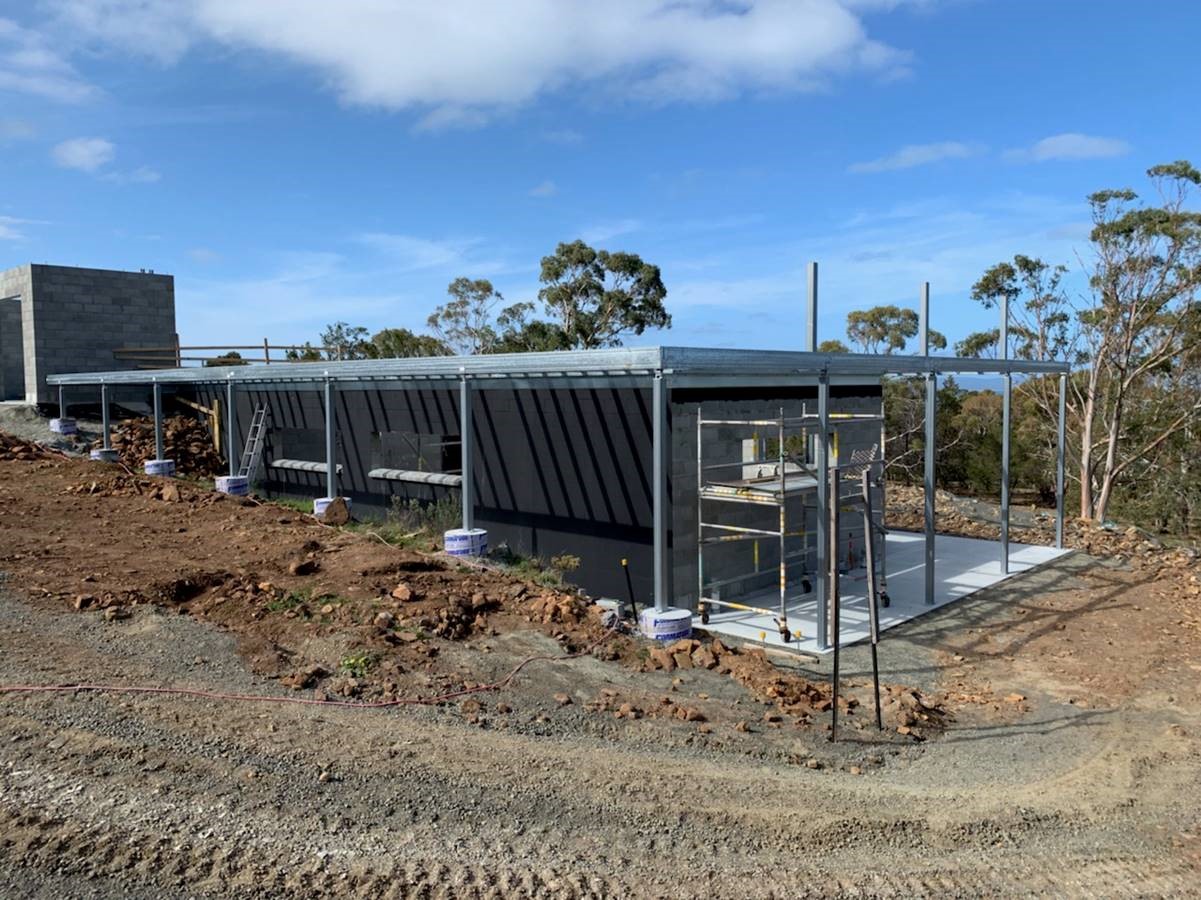 Having lived most of their life on Victoria’s Mornington Peninsula, Geoff and Debbie chose to build their retirement home on a seven-acre lot in Swansea on the east coast of Tasmania. With a long career in design, construction and project management, Geoff (MAIPM) chose to complete the home as an owner-builder using contract labour.

The house would be single storey with a basement; the upper footprint would measure 215 square metres plus an attached garage. The building footprint featured three metres of fall, and the property also sits within a BAL 12.5 fire zone.

Geoff and Debbie always planned to have a deck as a key feature of their new home, but with the large amount of fall across the building footprint, Geoff had concerns about safety and considered various execution options to overcome working at height exposure.

“I’m big about safety, and with that sort of fall and my experience I thought, ‘how are we going to do this safely?’” Geoff recounts. “There were a few options available to us including scaffold hire, early building a deck to substitute as scaffold and utilisation of mobile plant and equipment. Enlarging the deck surface area and extending it almost three quarters of the way around the house was the most economical option for the duration of the house build.”

The couple considered timber for their deck but decided the effort required on site for the work team to measure, cut and install timber framing for the large deck would pose challenges given the heights involved. The costs considerations were also critical because the deck itself would be a sizeable 230 square metres (larger than the upper footprint of the house).

A pre-cut and drilled structural steel deck frame kit became an attractive option because it would maximise works in the manufacturing plant and minimise works at the building site. So, they turned to steel, and soon started the conversation with Spantec Systems.

“I hadn’t used them before,” explains Geoff, “but no-one in Tasmania really does [steel deck framing supplies] to the same extent than Spantec do in New South Wales. There are places where you can buy similar components, but it’s not always designed and pre-cut to the same extent as Spantec.”

“I found Spantec to be very accommodating to our needs,” says Geoff. “They provided all the steel materials pre-cut, except for the support posts which were site cut to suit final levels of concrete footings. Adjustable pier heads and base plates were used throughout; they are fantastic. Everyone who has seen it has positively commented on the deck structure and adjustable height posts.”

Spantec shipped the order from their Mittagong base to the Swansea building site on two truckloads, such was the size of this job. Geoff noted that Spantec owning the liability for both the manufacture and supply of the product until it is delivered to the building site provided peace of mind while the materials travelled from NSW to Tasmania.

Using the Spantec product for the first time, Geoff’s contract labour work team commented noted how easy the system was to assemble.

“It took us four and a half weeks to build 230 square meters of deck structure at an elevated height,” Geoff recounts. “The work team said they would seriously think about whether or not to do timber decks in the future or use something like Spantec because of the ease of assembly.”

“We even bought some adjustable heads and bases from Spantec to use on one section of the house where Debbie was quite adamant that her yoga room have a timber floor rather than a concrete slab. Fantastic!”

Overcoming the challenges of a sloping block

Geoff and Debbie faced key challenges due to the severe slope of their building footprint on the site. The unique and versatile design of the Spantec system makes it the perfect solution for sloping blocks and enabled the couple to overcome these site challenges.

In addressing the slope on the block, Spantec designed a solution that featured 30 support posts, varying in height from 500mm to three meters, with re-adjustable heads.

“We laser levelled everything, cut and assembled the posts, stood [the posts] up set at the midpoint of adjustment.” Geoff explains. “I would go so far as saying that the whole deck is level within one or two millimetres over the whole 230 metres squared area, which is quite an achievement on such a sloping block. It was great to be able to use the adjustable heads to help us overcome that. We couldn’t have asked for a better result.”

The result is so great that Geoff and his team will use the now completed Spantec deck as the scaffold platform for building the top level of the house.

“The money we were going to invest in hiring scaffolding, we’ve instead invested in Spantec,” beams Geoff. “And when we’ve finished, we’ve got full utilisation of that money invested in the house and the deck rather than in temporary scaffolding. I can’t speak highly enough of the Spantec team and how they accommodated our needs.

“We’re still talking to them for a couple of things we’ve added to the project, such as using their post bases upside down to support our handrail on the posts. We’ve actually got 65 of those in transit now coming down from Spantec; I see it as an ongoing relationship between Spantec and us.”

A member of HIA (Housing Industry Association) and NASH (National Association of Steel-Framed Housing Inc), Spantec Systems offers user-friendly and durable components (all steel supplied by BlueScope) for a simple and quick install. If you want a deck that offers a long-life span with minimal maintenance, call us on (02) 4860 1000 or email sales@spantec.com.au for more information and a quote.